How’s the weather today? Warm, sunny? We are also warm here, but only if we don’t leave our cabins. Guess where we are? You’ll never guess: We are in Antarctic waters, mixing icy asceticism with science and art. Our 117-meter-long vessel, the Academik Sergey Vavilov, has already left the harbor of Ushuaia, which is located in Tierra del Fuego, Argentina, and is heading south.

South sounds warm, but in fact it’s not: We will be crossing the Antarctic Circle, touching the shores of several islands near the Antarctic continent, planting our feet on the ice of Antarctica itself, and then heading to Cape Horn. Only then will we turn back home. 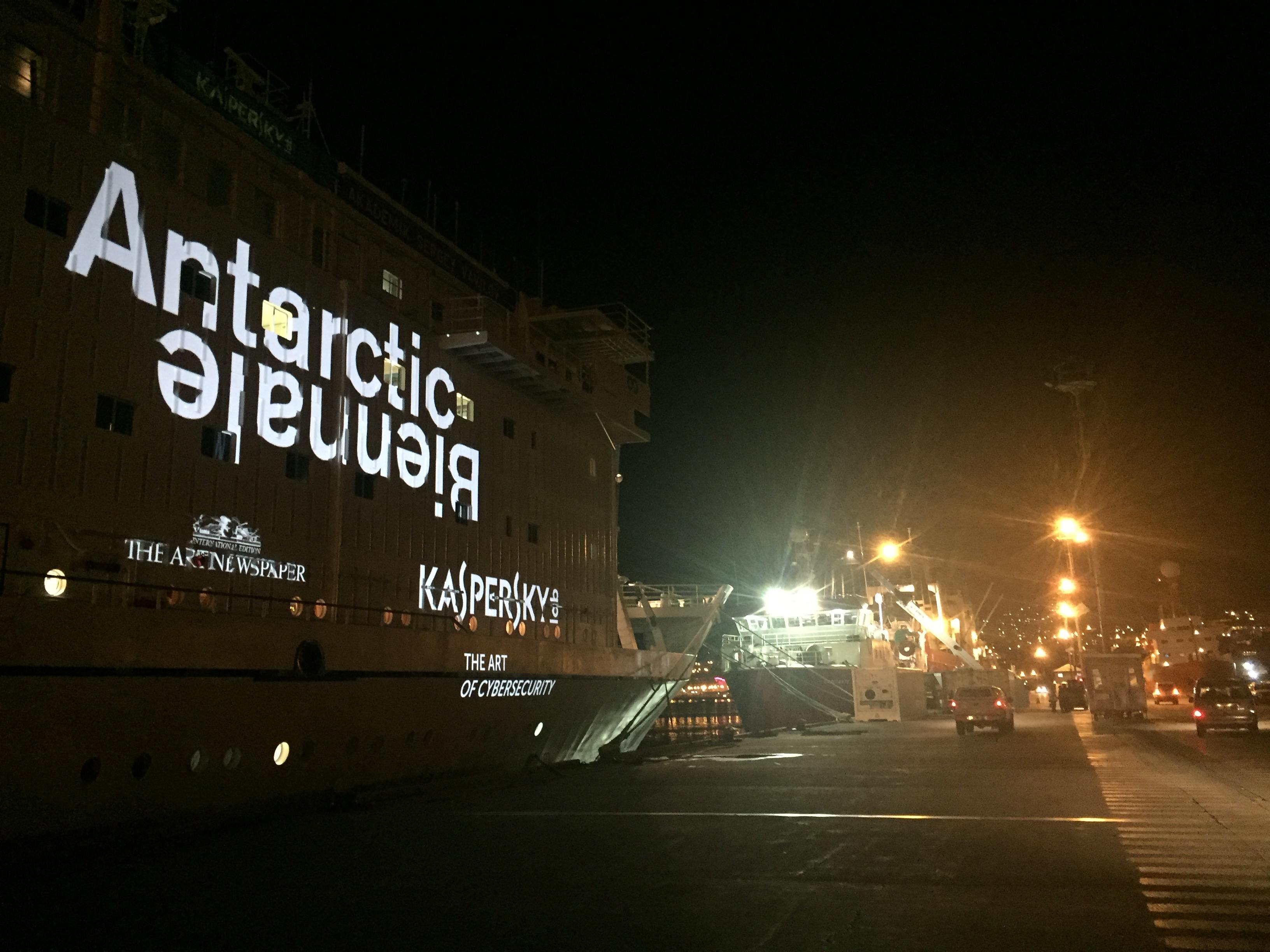 The conditions here are, let me say, spartan: one satellite phone, with a data plan of 100MB, for the whole team. But can that stop us from posting photos? No way! So we’ll try to liveblog, taking pictures of whatever strikes the eye and posting whatever the narrow satellite data line allows us to send to the mainland. So, the right way to look at this post is from the end to the beginning — scroll down and away we go!

March 28. What’s unique about the Antarctic Biennale is that it’s not about contemporary art only, but also incorporates philosophic debates and scientific discussions. That’s the main idea of its organizers: “To unite but not to mix” the participants and create a unique cross-discipline project. On the one hand, this enables us to look at different things from different directions and entertain different opinions. On the other hand, it inspires us to discover new things and ideas.

We spent the whole trip back to Ushuaia doing exactly that: discussing projects and results, projecting into the future, fantasizing, and planning.

Eleven days on a ship amid extremely dangerous (though stunning!) scenery is enough to unite any group. It was certainly enough for us, and everyone felt really sad saying their goodbyes. But isn’t that sadness the best evidence that the event was a success?

Well, Antarctic Biennale isn’t really over yet. We have a lot more interesting things to show and take part in: exhibitions, conferences, books, and even a movie. Stay tuned!

March 26. Seems like the weather finally took mercy on us, so we are surrounded by stunningly beautiful scenery. They call this place Paradise Bay for a reason.

This weather also allows us to do a lot of things in just one day. Here, for example, is the installation by the leader of our expedition, Alexander Ponomarev. Assembling it on board took several days, but now it’s finally floating out. The easiest way to describe it … well, there’s no easy way; it’s complicated. It looks like three spherical chandeliers with a lamp below them, all hanging in the water below a zodiac. The chandeliers are designed to redirect light from the surface of the sea to the lamp so that it glows, which pleases the local flora and fauna — at least we hope it does. The installation aims to inspire them with our art.

And here’s another couple of installations from yesterday, both related to caring about nature. Number one: Sho Hasegawa, skating on the Antarctic ice. He was using skates that can generate electric energy. He also had a light pen, which can be used to draw if its battery is charged. Guess what is in charge of charging it? The skates! Number two: a couple of black pyramids floating in the sky and consuming solar energy. So, no harm is done to nature, yet the electricity flows and powers different devices. That could find use even outside Antarctica — provided that one can find enough skates and black pyramids.

And, of course, we can’t forget about our Green Bear. He’s an installation in his own right, but at the same time, he can participate in other installations — at least in those rare moments when no one is trying to hug him or take a selfie with him. The big green guy is very popular.

And here’s some more Antarctic adventures of our Green Bear.

March 24. 7:00 AM — wake-up time, getting up to the loudspeaker saying “Good morning, biennale!” instead of a normal alarm clock. Today’s the first sunny day of our expedition, so we see our first Antarctic sunrise. It’s gorgeous. It deserves if not a song, then at least an installation. The foil that Joaquin Fargas is installing on the ice shines and glitters in the sunlight.

We made a photo exhibition and invited the local penguins. Seems they liked it. And Shama Rahman played a sitar concerto for them — and for us as well, of course. It sounded fantastic, especially in the middle of the icy Antarctic. Were there ever any concerts on this continent before we came?

March 23. South and south we go. We were supposed to stay at the old UK special operations base at Lockroy Port, but it seems the weather disapproved. So we moved west to the Errera Channel — and there we had a unique chance to watch the whales dancing. Lots and lots — and lots — of whales. Even our captain, who has sailed Antarctic seas for more than a dozen years says he’s never seen so many whales at the same time.

But we needed something spiritual for dessert. So together with Yasuaki Igarashi we prepared a fish net. He says that it connects the memories of the people who weave it. And it’s made of rope of different colors. If you look through it once it’s in the air, you see the scenery in a new light.

March 22. Here’s some more Antarctic scenery. More penguins, icebergs, and installations still to come as we continue our journey.

March 21. Antarctic does not care about one’s schedule. We thought that we would have a chance to stretch our legs on the actual earth yesterday, but it didn’t work that way. Either the weather conditions were too bad to harbor, or the icebergs were too big to bypass. So the hospitable penguins on the Petermann island had to wait for us till today – and it took several attempts to reach the island.

The whole population of the little island was there to greet us – Gentoo penguins were joined by southern elephant seals and even by several whales that were rising near our vessel. Probably they were just eager to finally see some art: we’ve brought them three installations. And now we’re about to save the world yet again: The Glaciator robot has started it’s journey, compressing snow and preventing ancient viruses from waking up and jumping into the ocean.

Of course, plans and schedules don’t collapse in a vacuum; they take other plans with them. We were supposed to be passing through the Lemaire Channel, but wouldn’t you know it, it was blocked by icebergs — with no way to bypass them. So the next installation, which should’ve been projections on the coast of the channel, was done right on the iceberg. But, probably, it’s even better that way. The author of the idea is Alexis Anastasiou. He’s Brazilian, an artist, and an all-around nice guy.

March 20. We’ve just crossed the Antarctic circle! And we’ve seen our first icebergs. In just two hours we’ll disembark on the first icy island and have some fun walking.

March 19. Just exited the Drake Passage. They say 15-meter-high tides and 35-meter-per-second winds are common for this place, but our experience is completely different: everything’s calm, and the only problem is zero visibility.

March 18. By the way, the green bear has had a lot of adventures traveling here so far. To begin with, two bears were sent from their home, Japan, but got stuck in Russian customs. The third bear went to Paris, and there Air France employees desperately measured it again and again because they thought it wouldn’t fit on the plane. Well, we were ready for that, and the package was precisely crafted with airplane specifications in mind. So, here is the bear. At least it’ll see some Antarctic sights.

March 17. Ready, steady, go! The Academik Sergey Vavilov and about one hundred of its dwellers have just left the harbor at Ushuaia and are heading south, straight into the yawning abyss of Antarctic ice. We’re in nice company here — everyone is very communicative, creative, and sometimes weird. What else would you expect from scientists, futurists, and artists? And the green bear is also here, of course. This is our last chance to take pictures with a normal camera and transfer them via normal data link, so we’re indulging ourselves.

How to keep your smartphone coronavirus-free

The Three Little Pigs and cybersecurity

We’ve got a multi-function cyber-X-ray in development, but some of its functionality can already be used right now.