The bill for your company’s Internet access just made you grunt in annoyance. And you know exactly who to thank for it. The offender has repeatedly been addressed, but either the new intern does not understand or he sincerely believes that the company pays for search traffic during working hours only… You are going to have to take unpopular technical measures. You open the Control Center, select the offender’s computer and change the settings of web policies: no more downloading files, no hanging around in social networks for half a day, no games. He does not know the administrator’s password, so he will not be able to restore the previous settings.

Configuring web policies when installing Kaspersky Small Office Security is a process that can take littler time or a great deal, depending on the wishes of the business owner and the person acting as a system administrator within the company. These features are designed to regulate the use of individual computers and web resources by the company’s employees (the title is quite clear by itself). If you need to implement restrictions, Kaspersky Small Office Security offers two preset setup modes (Weak and Strong Restrictions) and the option for Custom Restrictions.

Try to imagine situations where you may need to impose restrictions.

The first thing that comes to mind is certainly time and traffic consumption. If an employee spends an indecent amount of work time on activities that have nothing to do with work, sooner or later there will be questions asked. As it often happens, after being reprimanded, “improper activity” decreases, but eventually everything returns to normal. If productivity suffers, then at some point the manager may decide to limit or completely block the employee’s access to the resource that he/she spends too much work time on. It may be a social network, some web resource or an instant messenger.

Access to social networks can be blocked in the Web Browsing section where you can deny access to entire categories of sites or allow access only to a limited number of resources. 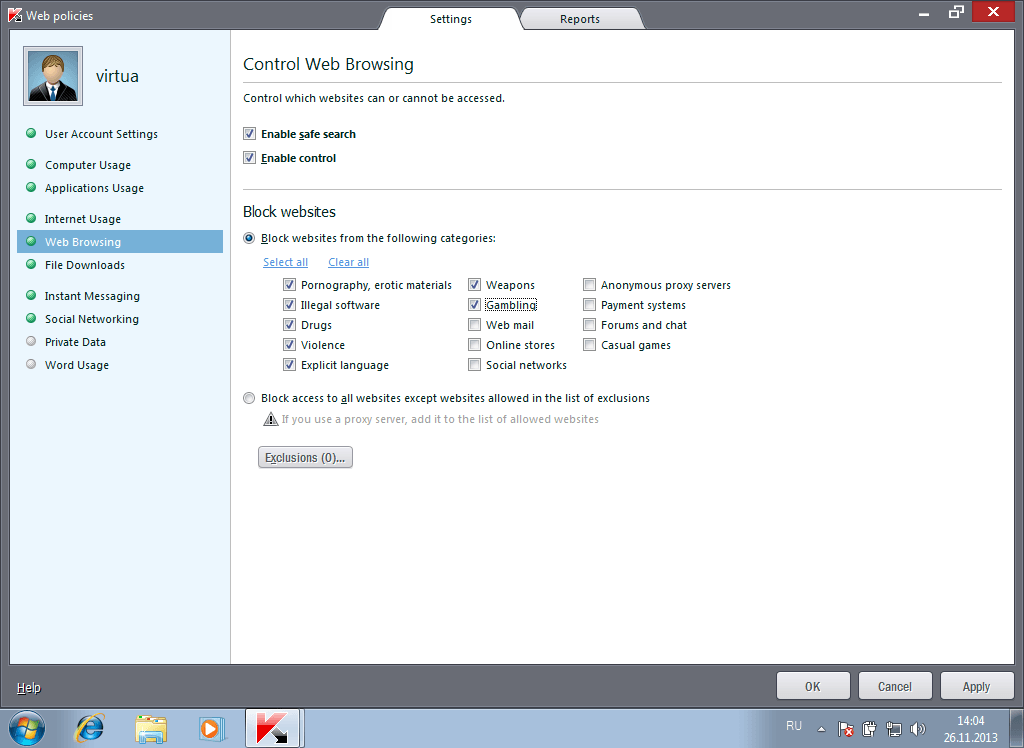 Access to social networks can also be limited, but you cannot do it immediately. Initially, Kaspersky Small Office Security will collect data on these types of activities, and after will allow an employer to impose restrictions on certain sites for an employee.

Instant messaging can be disabled by the Application Usage feature. 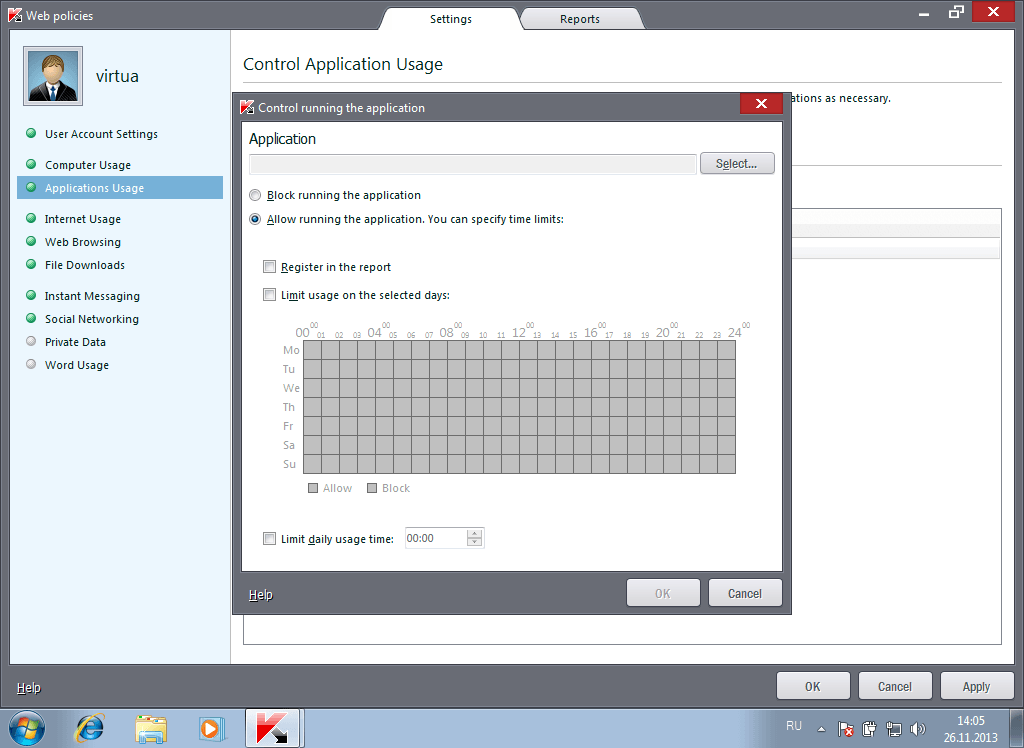 An authoritative decision may ban a company’s employees from visiting this or that web resource. But it can be easier if the need for such limitations is provided from a technical standpoint.

Improper traffic consumption may also cost companies. Most of the traffic is spent on multimedia files like music and video. Kaspersky Small Office Security allows you to block the downloading of music and video files as well as programs and archives. By the way, blocking the last two may also serve as an additional security measure because malware often hides in archives, and strange executable files are not all equally useful.

Moreover, you can block access to sites of such categories as pornography and erotica, illegal software, drugs, gambling and so on.

The use of the Internet and the computer itself can be limited in time: for example, if for some reason the head of the company does not want employees to stay late at work, or to prevent computers from being used after hours by unauthorized persons, like security personnel. 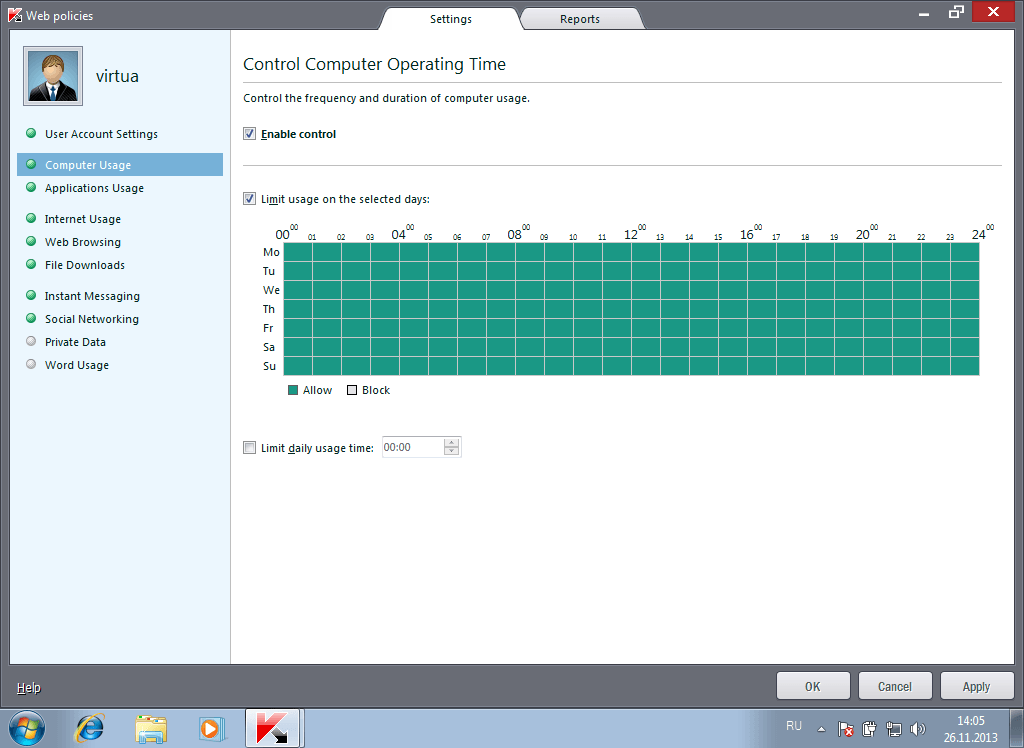 But if you hate to mess around with custom restrictions, then, as I mentioned above, there is a choice for Weak and Strong Restrictions within settings “for all occasions”. With the first mode on, Kaspersky Small Office Security collects statistics from users’ computer use and online activities and prohibits visiting the web sites of the categories specified in the settings, including preventing the use of anonymous proxy servers, which may at least in theory be employed to bypass blocking of certain resources. 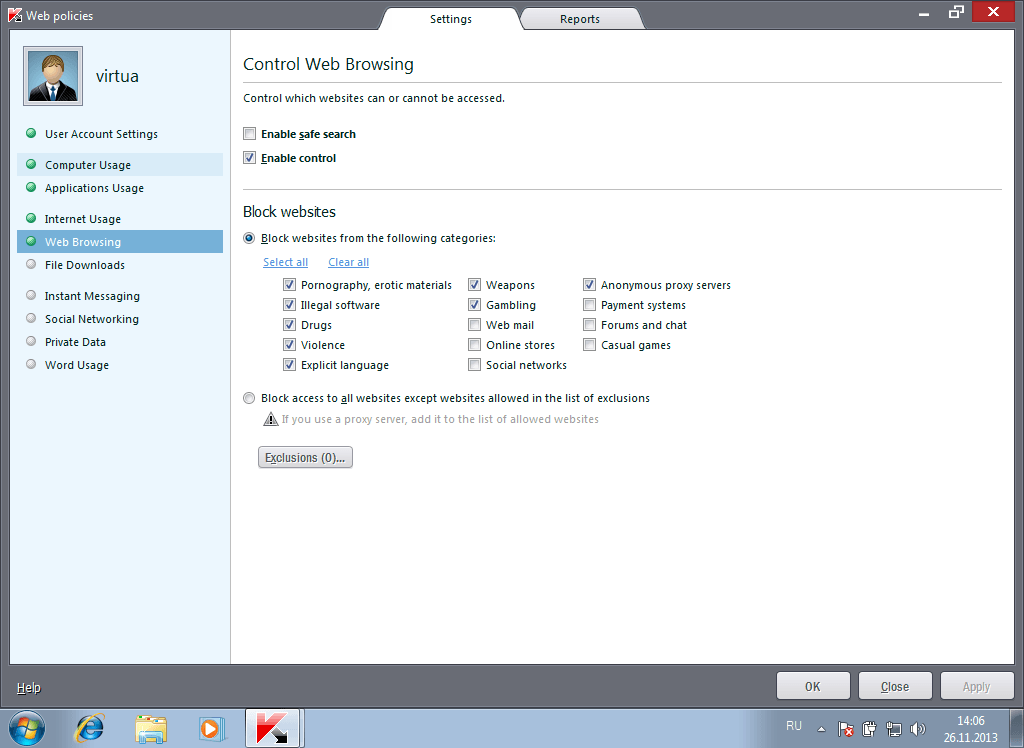 Under the Strong Restrictions mode online shopping, e-banking and social networks are banned by default, in addition no files are allowed for downloading (when the corresponding function is enabled). 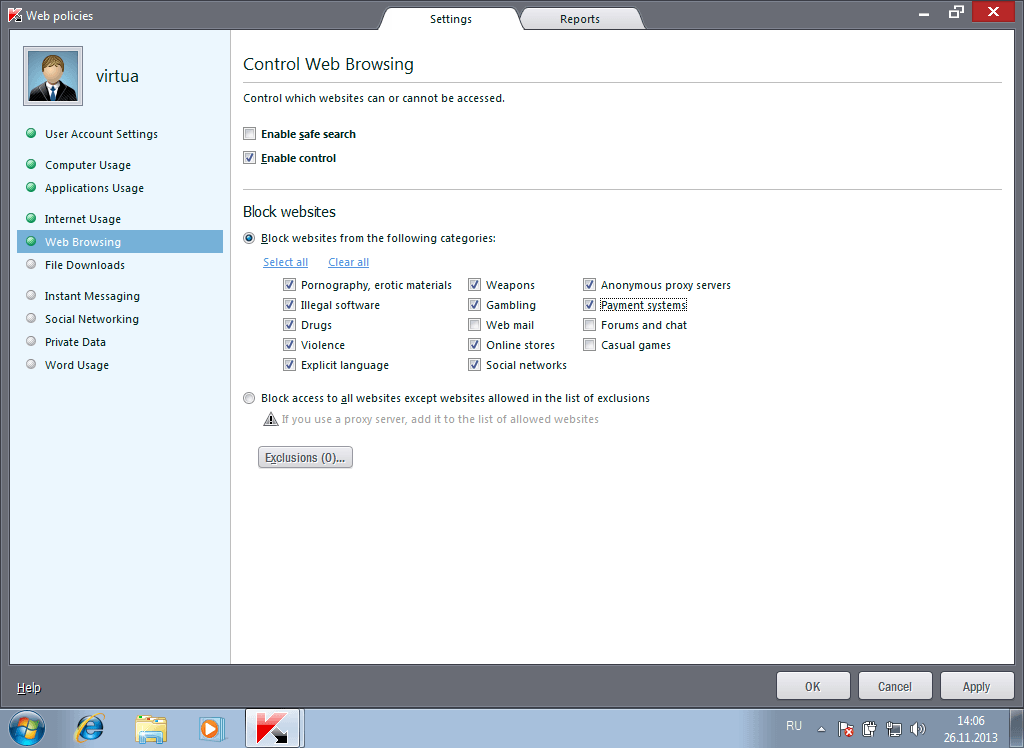 Finally, there is a mode, which permits all access, but keeps a record of all user activities. Sometimes just realizing that a system administrator can see everything that you do is enough to make you refrain from unauthorized acts. 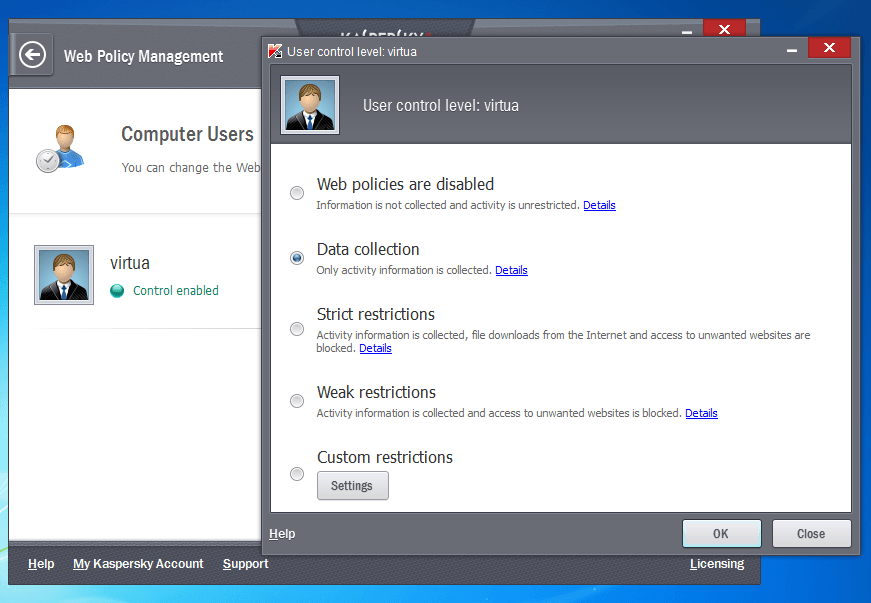 It is important to note that changes to web policies require entering an administrator’s password. It is impossible to change the settings any other way, which eliminates the possibility that an employee would regain access to blocked resources.

The only item left to add is that an authoritative decision may ban a company’s employees from visiting this or that web resource, but it can be easier if the need for such limitations is provided from a technical standpoint. Then employees understand that the company has certain rules, and it is a piece of software that provides compliance with them, not just manager’s despotism.

What Ferrari team has to know about security

It’s a weird time for mobile payments. Years ago it was thought that by now some parts of the world would be well on their way to if not fully