This comes after the company’s researchers observed that at least 174 municipal institutions, have been targeted by ransomware during the last year. This represents a 60% increase at least, from the figure in 2018. While threat actors’ demands would sometimes reach up to $5,000,000, actual costs and damages sustained during attacks are estimated to be larger. These are among the main findings of Kaspersky’s Security Bulletin: Story of the Year 2019.

Ransomware is a notorious headache for the corporate sector, affecting businesses around the world for a number of years. As if that wasn’t enough, 2019 has seen the rapid development of an earlier trend, where malware distributors have targeted municipal organizations. Researchers note that while these targets might be less capable of paying a large ransom, they are more likely to agree to cybercriminals’ demands. Blocking any municipal services directly affects the welfare of citizens and results, not only in financial losses but other socially significant and sensitive consequences. 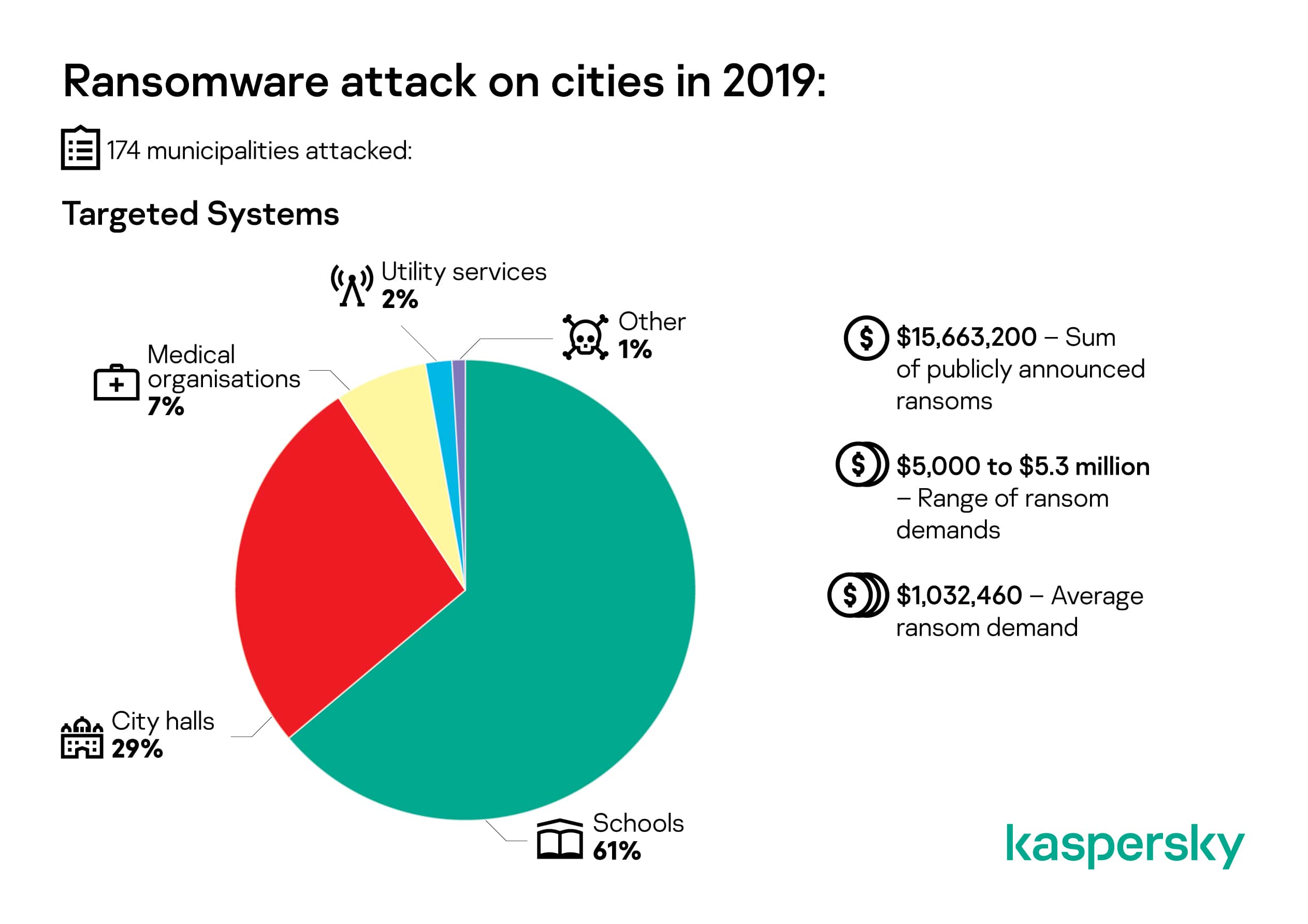 Judging by publicly available information, the ransom amounts varied greatly, reaching up to $5,300,000 and $1,032,460 on average. The researchers noted that these figures do not accurately represent the final costs of an attack, as the long-term consequences are far more devastating.

“One must always keep in mind that paying extortionists is a short-term solution which only encourages criminals and keeps them funded to quite possibly return. In addition, once the city has been attacked, the whole infrastructure is compromised and requires an incident investigation and a thorough audit. This inevitably results in costs that are additional to ransom. At the same time, based on our observations cities might be sometimes inclined to pay because they usually cover the cyber risks with help of insurance and allocating budgets for incident response. However the better approach would be also investing in proactive measures like proven security and backup solutions as well as regular security audit.”, comments Fedor Sinitsyn, a security researcher at Kaspersky. “While the trend of attacks on municipalities is only growing, it can be stifled and nipped in the bud by adjusting the approach to cybersecurity and what is more important by the refusal to pay ransoms and broadcasting this decision as an official statement.”

The malware that was most often cited as a culprit varies too, yet three families were named as the most notorious, by Kaspersky researchers: Ryuk, Purga and Stop. Ryuk appeared on the threat landscape more than a year ago and has since been active all over the world, both in public and in the private sector. Its distribution model usually involves delivery via backdoor malware which in turn spreads by the means of phishing with a malicious attachment disguised as a financial document. Purga malware has been known since 2016, yet only recently municipalities have been discovered to fall victims to this trojan, having various attack vectors – from phishing to brute force attacks. Stop cryptor is a relative novice as it is only one year old. It propagates by hiding inside software installers. This malware has been popular, number seven in the top 10 most popular cryptors ranking of Q3 2019.

To avoid such malware infilitrating organisations, Kaspersky has the following recommendations:

Read the whole story of the year at Securelist.com

The full list of Kaspersky Security Bulletin stories with results from 2019 and predictions for 2020 is available by following this link.